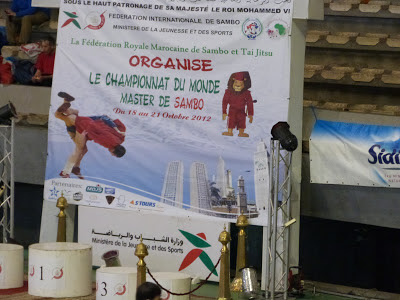 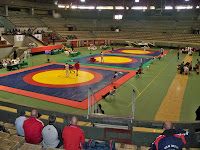 The venue for this event was the Mohammed V stadium Casablanca la very impressive place with 3 full size mats as per usual the FIAS accreditation was pandemonium but once the tournament started it ran like clockwork. I had a couple of complaints and they were that there  was no where in the stadium to get a coffee or snack, there was no memorabilia for sale. Also I expect due to a admin error there was no Union Flag and no mention of the UK in the programme list of participating countries, maybe this was the reason UK and Swiss team did not get a participation gift. These were just annoying because the main reason we were here was to compete in the Worlds. 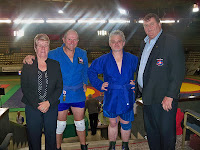 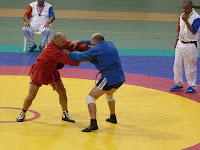 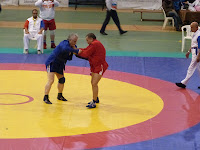 Drew again had a hard fight fighting his first match with the eventual Russian Gold medallist, yet Drew has been training since he was 5 years old and did not give up. He fought in the u90k class to avoid having two players in the u82 k, Drew could not match the Russians strength but for man of his age he was very agile twisting out of throws but the outcome a loss on points was inevitable. His next fight was against a Ukrainian who arm locked him in the 3rd minute, so no medals for Team GB this time.
I always have admiration for men who put their reputation on the line, Swiss Sambo President Herve Gheldman was one of them who though unplaced had the courage to have a go. 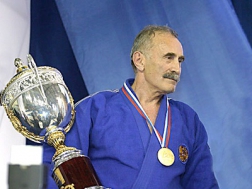 Another was the famous Major General ASLANBEK ASLAKHANOV a legend in Sambo and In the Eastern block In 1967 he joined the police force and in 1988 played an instrumental role in saving hostages on board a plane in Mineralnye Vody, for which he was awarded the order of the red star. Author of Democracy Cannot Be Criminal, Mafia, the Fifth Power, and Mafia in Russia with No Sensation. Master of sports in Wrestling, Sambo, and Judo. Until 1987, was Vice President of Moscow Judo Federation, later was the President of the International Judo Federation uniting CIS countries' athletes.The 70 year old won both of his fights to take Gold but he could have easily have watched shaking people's hands, he won a lot of respect from a lot of people including mine, a man of courage. 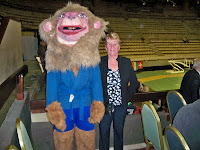 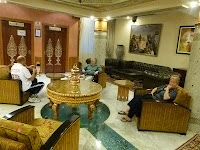 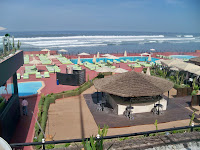